Traveling Tuesdays for the letter ‘K’ is going to the Arabian Sea and visiting the State of Kuwait. 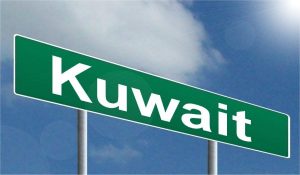 Kuwait is an Arab country on the Persian (Arabian) Gulf and has a cultural heritage dating back to antiquity. 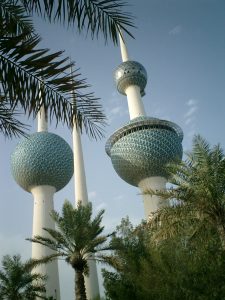 Kuwait City, the capital, is known for its modern architecture, ranging from skyscrapers to the striking Kuwait Towers, water towers whose design recalls the tiled domes of a classic mosque. 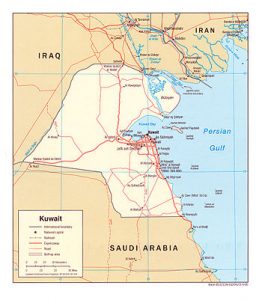 Situated in the northern edge of Eastern Arabia at the tip of the Persian Gulf, Kuwait shares its borders with Saudi Arabia and Iraq.  As of 2016, Kuwait has a population of 4.2 million people; 1.3 million are Kuwaitis and 2.9 million are expatriates.

Kuwait was the center of boat building  in the Persian Gulf region. During the late eighteenth and nineteenth centuries, vessels made in Kuwait carried the bulk of trade between the ports of India, East Africa and the Red Sea. Kuwaiti ships were renowned throughout the Indian Ocean.

The Sheikhdom of Kuwait became a British protectorate in 1899 (until 1961). The Anglo-Kuwaiti Agreement of 1899 was signed between Sheikh Mubarak Al Sabah and the British government in India, due to severe threats to Kuwait’s independence from the Ottoman Empire.

The Constitution of Kuwait was formally proclaimed in 1962. After the death of the Emir, Jaber Al-Sabah, in January 2006, Saad Al- Sabah succeeded Jaber,  but he was removed nine days later by the Kuwaiti parliament due to his ailing health. Sabah Al-Sabah was then sworn in as the Emir. Kuwait has a high-income economy backed by its oil reserves which were discovered in 1938.  The Kuwaiti dinar is the highest valued currency in the world.

In August 1990, Kuwait was invaded and later annexed by Saddam’s Iraq.  After a series of failed diplomatic negotiations, the United States led a coalition to remove the Iraqi forces from Kuwait, in what became known as the Gulf War.  On 26 February 1991, the coalition succeeded in driving out the Iraqi forces. As they retreated, Iraqi forces carried out a scorched earth policy by setting oil wells on fire. During the Iraqi occupation, more than 1,000 Kuwaiti civilians were killed. In addition, more than 600 Kuwaitis went missing during Iraq’s occupation, and approximately 375 remains were found in mass graves in Iraq. In March 2003, Kuwait became the springboard for the US-led invasion of Iraq.

I had the opportunity to live and work in Kuwait from 2002 – 2009.  For seven years I taught high school math at the Universal American School Kuwait. While I was there I experienced the ‘Crash and Burn’ of Baghdad. While most International Schools closed during the March 2003 invasion and sent their teachers out of the country, UAS high school teachers voted to stay open. The 12th Grade Students were in 1st Grade when the Gulf War started in 1990 and the owners wanted to make sure this year’s class could graduate and not have their education interrupted again.

When the March 2003 Invasion took place we were at the old school located in Salwa.  During the Gulf War of 1990, the Iraqi forces had overtaken the school and there were bullet holes in the stairwell and other evidence of damage to the building.

During the ‘week of the war’ we had created a safe room in our apartments by wrapping cellophane paper over the windows and around the light fixtures in case of a chemical attack.  I purchased a longer cord so I could carry my laptop into the bathroom and stay in my ‘safe’ room when we heard sirens warning of a possible missile attack.  There were also extra security guards armed with machine guns posted at the gates to the courtyard and we were instructed to buy a cell phone so school officials could contact us at any time. 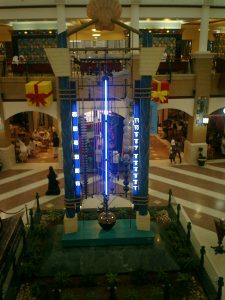 In spite of all the precautions, one missile came in under the radar and bounced off the water creating a sonic boom that caused some damage to the Souq Shark Mall.  When I checked my email in the morning, I had messages from home asking if we were OK.  The rest of the world heard about it before we did.  We waited a day or two and then drove down to the mall to see the damage for ourselves.  There was some structural damage and ceiling tiles had crashed to the floor but amazingly none fell directly over the famous water clock shown here. 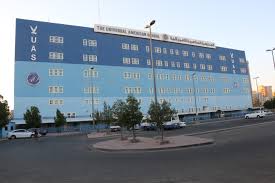 We were often told there were plans for a new school and finally a new school was built. I spent the last three years in this new building. 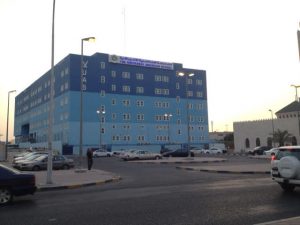 My classroom was on the top floor in the corner close to this mosque in Hawalli.  If I had a class during prayer call around noon, I would have to stop teaching and wait till the prayer call was over – the muezzin’s voice was too loud to speak over. 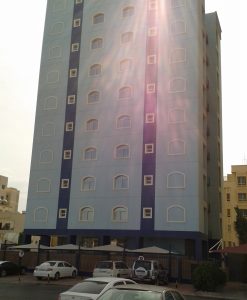 When the new school was built, they also built a teachers’ residence for us across the street behind the school. My apartment was on the eighth floor and this was my view of the school from my window. 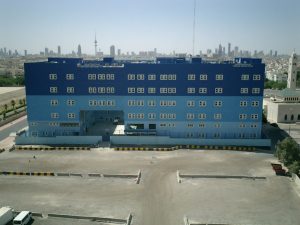 Teaching at an international school is a wonderful experience.  Besides teaching high school math I had the opportunity to participate in the extra curricular activities offered. 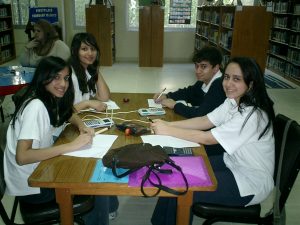 I coached the academic games team. 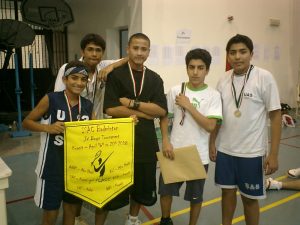 I coached the Varsity and JV Badminton Teams.  Here are the JV Boys Team receiving their medals after a city wide competition. 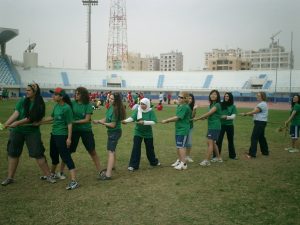 Each spring we would have a sports day and staff would be assigned a team or an activity to work with on that day.  Here is the green team getting ready for a tug of war!

I also shared Kuwait with family and friends from Canada. 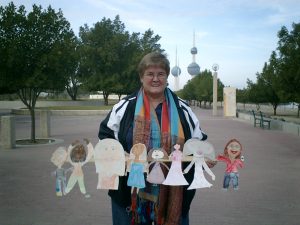 My niece, Averill, is a teacher in Quebec.  She had her class at Belle Anse near Pierce Rock, create a paper collection of her school children and she sent them on a trip around the world.  This was a social studies lesson for her class.  They wanted to learn about the countries their characters had visited.  Here is a picture of me holding their classmates with the Kuwait Towers in the background! 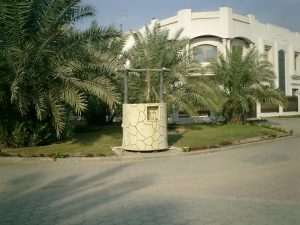 I had a bicycle, and I enjoyed exploring many parts of Salwa, Mishref, and Hawalli. 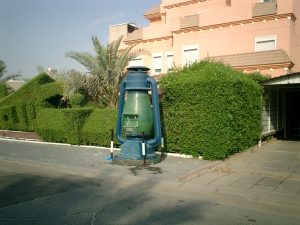 Here are photos I took of two drinking fountains I discovered while riding my bike and getting out and about in Kuwait.

Be sure and come back next week as we travel to a country beginning with the letter ‘L’.