Today you are invited to join me on a trip to a country beginning with the Letter ‘V’. 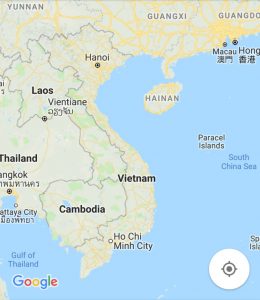 Vietnam is a Southeast Asian country on the South China Sea.

I had the opportunity to travel to Vietnam in March of 2015.  My friend who is the Executive Director of International Services for Lethbridge School District No 51, invited me to join her on a visit to Vietnam.  Teresa Loewen was attending a Canadian School Recruiting Fair in Hanoi and then meeting with some agents in Ho Chi Minh City.

I had to book my flight separate from Teresa’s, so we met in Hong Kong and flew to Hanoi together. 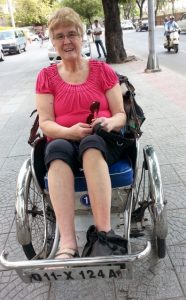 After deciding to join Teresa on this adventure, I got word that I was to have foot surgery.   I had to arrange for my visa online, and since I requested wheel chair assistance because of my foot surgery, we were able to get though customs quickly.  We arrived at our hotel where the School Fair was to take place and had a bit of time to explore the city by taking a cyclo tour.

Hanoi is the capital city and it is known for its centuries-old architecture.  At its heart is the Old Quarter with the narrow streets. 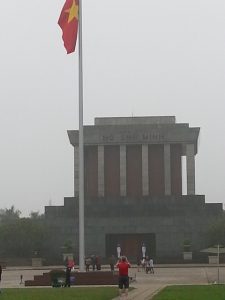 We saw the huge marble mausoleum which pays homage to a Communist-era leader, Ho Chi Minh. 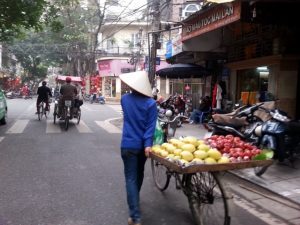 Perhaps the most interesting sights were the people, many traveling on mini bikes, and vendors carrying their wares on foot or by bicycles.
So many interesting things to see. 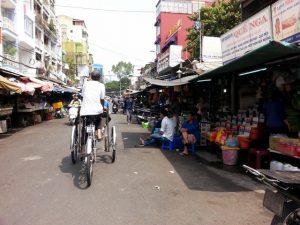 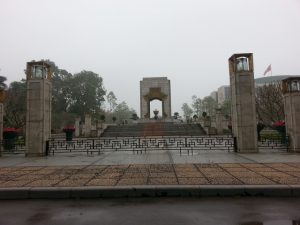 Our next stop was Ho Chi Minh City (commonly known as Saigon). This city in southern Vietnam famous for the role it played in the Vietnam War. It’s also known for its French colonial landmarks, including Notre-Dame Cathedral, made entirely of materials imported from France. 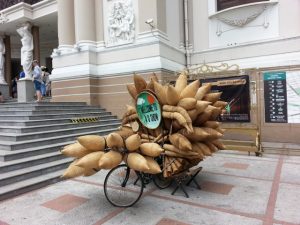 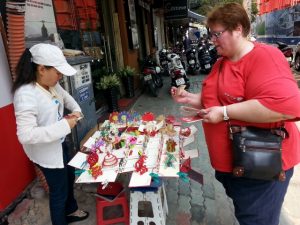 The Municipal Theatre of Ho Chi Minh City, also known as Saigon Municipal Opera House, is an example of French Colonial architecture in Vietnam. We attended a show at the opera house and enjoyed shopping for unique pop-up cards – a great souvenir of our visit to Vietnam. 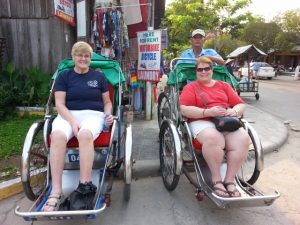 The third city we visited was Hoi An.  We hired a driver and went by taxi to spend a day exploring this city.  Once again we took a cyclo tour to visit the Ancient City which is a UNESCO World Heritage Site.
Hội An is a city on Vietnam’s central coast known for its well-preserved Ancient Town, cut through with canals.  We walked over this Japanese Covered Bridge. Inside the Japanese Covered Bridge lies a temple of the northern God Tran Vo Bac De. 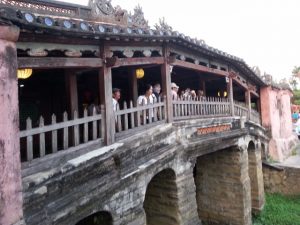 Many shops lining the narrow, pedestrian only streets. You can find shops that still craft the wood, stone and ceramic goods. 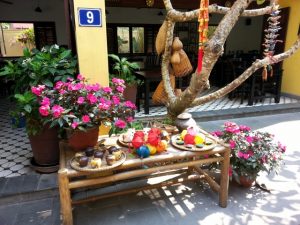 Hoi An is also famous for its vibrant culinary scene and busy riverside food market. 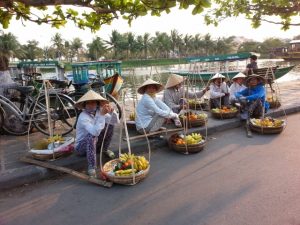 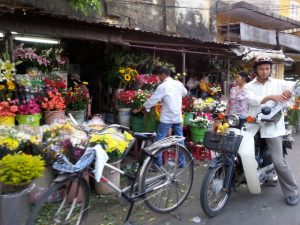 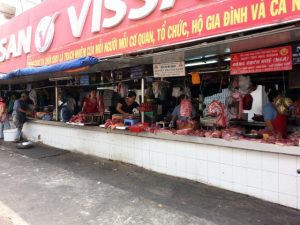 We did cyclo tours in all three cities and I so enjoyed being right in the middle of the busy markets and commercial centers of each one.  Here is one more picture of a local butcher’s shop open to the public right along the street.
All the photos I shared in this episode of Traveling Tuesdays were taken with the camera on my phone.  Doing this week’s story has brought back so many delightful memories of this brief visit to this interesting part of the world.
Be sure and catch next week’s Traveling Tuesdays.  Since next Tuesday is Christmas Day, I think I will provide a Christmas Special and share stories about the many countries represented on my Christmas Tree!  On New Years’ Day we will continue our series and travel to a country starting with the Letter ‘W’.
#LivingLifeAbundantly