If you search google for an Alphabetical List of Countries in the World, you will not find one that starts with the Letter ‘X’.  So for our Traveling Tuesdays episode this week we are traveling to the Province of Xi’an in China.  I had the opportunity to go to Xi’an and discovered another UNESCO World Heritage Site. 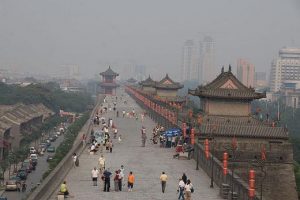 The city of Xi’an is the capital of Shaanxi Province in central China.  It is one of the oldest cities in China and was home to the Zhou, Qin, Han and Tang dynasties’ ruling houses. Xi’an is the starting point of the Silk Road.

Xi’an City Wall, shown here, is the most complete city wall that has survived in China. The Wall is one of the largest ancient military defensive systems in the world. 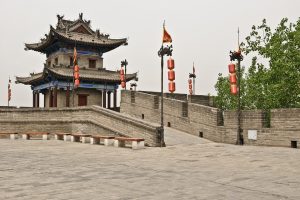 Our hotel was located in Xi’an and we took some day tours including a city tour that took us to see this rampart and see the view from the wall.

Since the 1990s, the city of Xi’an has re-emerged as an important cultural, industrial and educational centre of the central-northwest region, with facilities for research and development, space exploration, and national security.

As of 2018 Xi’an is the most populous city in Northwest China with a population of 12,005,600. Once known as Chang’an (Eternal Peace), it marks the Silk Road’s eastern end. 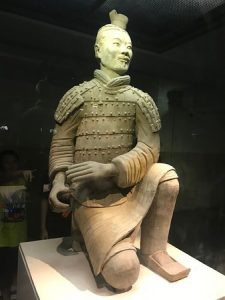 In 1974 farmers were digging a well outside the city of Xi’an, China, and came upon one of the greatest archaeological discoveries in the world.  The workers found a life-size clay soldier ready for battle. The diggers notified Chinese authorities, who sent government archaeologists to the site.

They found not one, but thousands of clay soldiers. Further excavations have revealed swords, arrow tips, and other weapons. 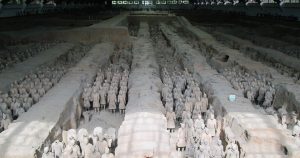 The soldiers are in trench-like, underground corridors. 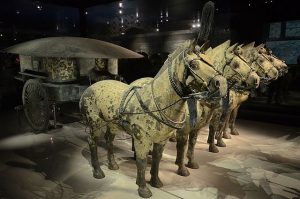 In some of the corridors, clay horses stand four abreast and behind them are wooden chariots. 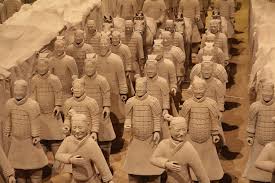 The Terracotta Army is part of an elaborate mausoleum created to accompany the first emperor of China, Qin Shi Huang, into the afterlife. The army had the purpose of protecting the emperor in his afterlife. It is a form of funerary art buried with the emperor in 210–209 BCE. 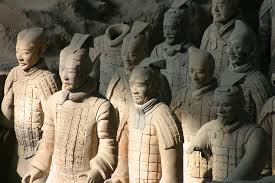 Some of the terracotta figures are without heads, but their bodies are complete. Studies have revealed that the heads, arms, and torsos of the figures were created separately. It is believed that most warriors’ heads and arms were produced in molds as separate modules. After the sculptures were assembled, clay was applied to the surface of the figures so that artists could model the faces and hairdos individually. The figures were then fired in kilns to make the clay hard and durable. After being fired, they were painted with bright colors.  Just like real people, every figure looks different and unique. After 2,000 years of erosion and humidity, most figures have lost their original color.  This link will take you to a picture showing the steps of producing a terracotta figure.

Here is my souvenir of my visit to this amazing site. 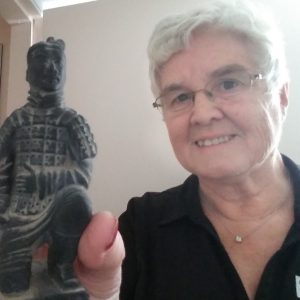 I found this article called 10 Amazing Facts You didn’t Know about the Terracotta Warriors.

You can learn more about this amazing discovery which was praised as the Eighth Wonder of the World by the former French Prime Minister Chirac early in 1978, and became a UNESCO World Heritage Site in 1987.

No doubt thousands of statues still remain to be unearthed at this archaeological site.

Come back next Tuesday as we will be traveling to a place that begins with the Letter ‘Y’.