Traveling Tuesdays is heading to the continent of Africa.  There are two countries that start with the letter Z and I have been to both of them.  For this week’s story I will share some things about my travels to Zimbabwe. 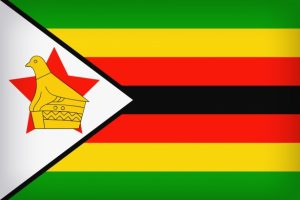 My sister, Ruth, was posted to the Embassy of Canada in Harare, Zimbabwe.  Harare is the capital city of Zimbabwe.  Just this week, there were protests over the hike in gas prices and as I was doing research for this blog I found this  report.
By Reuters

HARARE, Zimbabwe — Zimbabwe was under an internet blackout on Friday as authorities extended a communications ban to cover emails after days of deadly protests over price increases that pushed the cost of a gallon of gas to almost $13.

To read the whole report click on this URL Link …https://www.nbcnews.com/news/world/zimbabwe-shuts-down-internet-amid-violent-response-gas-protests-n960141 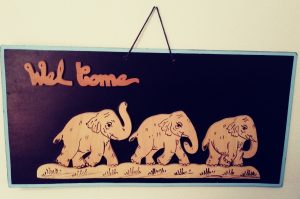 On my visits to Zimbabwe I was fortunate to be able to stay with my sister in a beautiful residence provided as part of her working arrangements for the Canada Foreign Affairs Department.  We lived in a gated residential home and there was a security guard on duty 24/7.  Ruth also had a gardener, a housekeeper and a maid who lived in their own quarters at the back of the property.  Talk about feeling spoiled while enjoying the perks of living with a ‘diplomat’.  On the upside, we were also helping their families by providing employment and so they could provide for their families. What was really fun, was Ruth got married while in Zimbabwe and the ladies came to the wedding and when Ruth and Al were pronounced Man & Wife, they did the traditional African call expressing their joy at the happy occasion.

There are many political problems in Zimbabwe and the economic situation is only one of them.

When I searched for the exchange rate I found this information.

The Zimbabwean Dollar is the currency of Zimbabwe. The currency code for Dollars is ZWD, and the currency symbol is Z$. Then the report ended with this…

Notice: The Zimbabwe dollar has been suspended indefinitely. 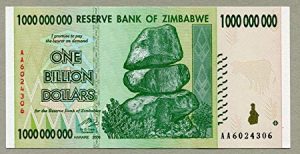 This One Billion Dollar Bill is not worth very much.  The exchange rate is $1 USD = $250 Trillion Zim Dollars.  In another comment I found, it said the use of the Zimbabwean Dollar as an official currency was effectively abandoned on 12 April 2009. 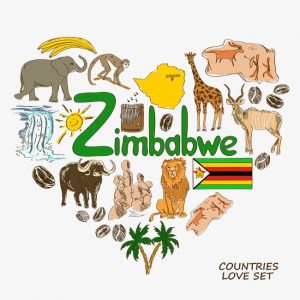 This poster of Zimbabwe is closer to my memories of my visits to this country.  I see Vic Falls, I see animals  – elephants, monkeys, giraffes, lions, guinea fowl.  These are the beautiful memories I have of my time spent with my sister in Zimbabwe. 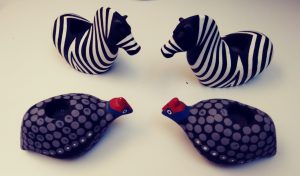 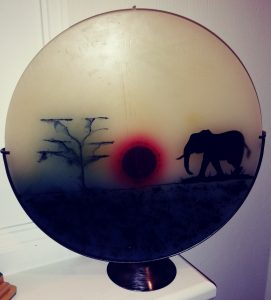 As mentioned earlier, Ruth and Al were married in Zimbabwe.  Plans were made to have the wedding outside of Harare but in the last week changes were made and the reception took place on the front lawn of Ruth’s residence.  She had hoped to ride in on an elephant and had practiced sitting sidesaddle but all that changed when the venue was changed.

I do remember another elephant story…

One time we went to Leopard Rock. Located beneath Leopard Rock in Zimbabwe’s Bvumba Mountain Range, the Leopard Rock Hotel also offers Elephant Trail Rides as well as a Golf Course. We drove to see the famous hotel which has hosted royals and went for an elephant ride. At this place one rode bare back and one has to do the splits to tuck in behind the person sitting in front of you on the back of the elephant. I remember how stiff and bow legged we all were after the ride in the fabulous countryside.

Another adventure involving Hippos deserves a mention.  The first summer after teaching a year in Kuwait, I decided to go back to Zimbabwe and spend some time with Ruth and Al before heading home for the summer.  They took some vacation time and we headed to Mana Pools, located on the Zambezi River.  While there we did a safari ride and saw some Lions, Zebras and Giraffes.  Another guided tour was a canoe ride down the Zambezi River.

I was in the canoe with my brother-in-law and Ruth was with the guide.  We saw a pod of hippos when we pulled up to enjoy some lunch and then after checking to see if our way was clear, we continued down the river toward the dock at the Mana Pools camp ground area.  The guide encouraged us to stay very close behind his canoe and I was focused on keeping as close as possible.  All of a sudden the canoes overturned and we were all in the water.

A hippo, hiding underwater, pushed up and took a big bite of the other canoe and as a result tipped Ruth’s canoe.  Since we were so close my canoe was caught in the other canoe and we tipped too.  Good bye Al’s glasses, good bye cameras not in our pockets, good bye extra sweater, good bye anything not tied down.  The guide quickly jumped up and sat on the overturned canoe and encouraged us to climb up too.  We were not as agile as our guide so we just hung on to the side of the canoe and floated down the river.

We were hoping to reach the shore and we finally got near a sand bar.  We gingerly tested to see if we could reach bottom and push the canoes to shore.  The one canoe was toast – the hippo’s teeth had poked holes and it was taking on water.  Ruth got in the one good canoe with the guide and they left Al and I behind on the sand bar where there were tracks make by sunning crocs who had slipped into the water.  The guide left a gun with Al to protect us from the crocs and hippos but I am not sure it would have helped since Al lost his glasses in the river! Al kept asking me if they were getting closer while we waited to be rescued. 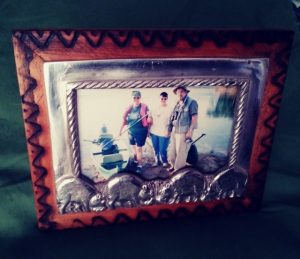 It was dark by the time they returned with a motor boat to take us back.  And guess what they didn’t bring a light!  We had to go by starlight back to the camp and work our way around the hippos and crocs that were lurking in the river.  We all lived to tell the story but it was certainly an adventure none of us want to repeat.  Definitely an interesting way to get to know one’s brother-in-law!

The next year, my Christmas present from Ruth and Al was this picture in a frame containing hippos!

Well, I made it through the alphabet.  I have enjoyed writing the Traveling Tuesdays posts and sharing stories of places I have had the opportunity to visit.  There are many more places to write about so come back next week and we will begin Round #2 with a visit to another place that starts with the Letter ‘A’.