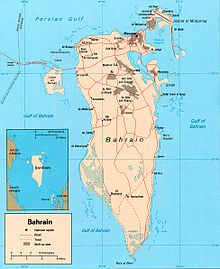 Traveling Tuesdays this week is heading to a nation comprised of more than 30 islands in the Arabian Gulf. 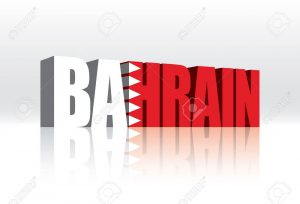 Officially the Kingdom of Bahrain, this sovereign state, is located between the Qatar peninsular and the northeast coast of Saudi Arabia. 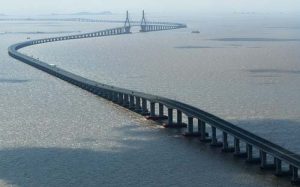 Bahrain Island is connected to Saudi Arabia by the 25 km King Fahd Causeway.  There’s a border crossing half way across at which point you’ll have to turn back unless you have a visa. 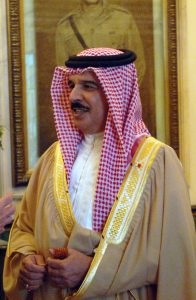 Following a period of Arab rule, Bahrain was occupied by the Portuguese from 1521-1602.  The Portuguese were expelled by Shah Abbas I of the Safavid dynasty of the Persian Empire and in 1783, the Bani Utbah clan captured Bahrain from Nasr Al-Madhkur. The Al Khalifa royal family is the ruling family today.  In the late 1800’s, after successive treaties with the British, Bahrain became a protectorate of the United Kingdom. Bahrain declared independence in 1971 and the Arab constitutional monarchy of Bahrain, formerly an emirate, was declared a kingdom in 2002. 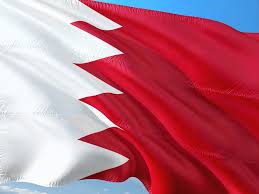 A new constitution was introduced in 2002 which provided for an elected parliament and gave women the right to vote.

Bahrain’s flag consists of a white band on the left, separated from a red area on the right by five triangles. The five white triangles symbolize the five pillars of Islam.

Bahrain’s constitution guarantees religious freedom and the small Jewish community has a synagogue (not operational).  There are several churches including Anglican, Catholic and the National Evangelical Church. There is an Indian Orthodox church as well.  The Indian community also has a number of Hindu religious centers including a temple in the souk, said to be between 60 and 100 years old.

Four-fifths of the population lives in cities.  The majority live in Manama.  The capital city stands on a seabed, parts of which were recently reclaimed from the water.  Manama has modern builds and wide, tree-lined streets.

The Bahrain World Trade Centre is the first skyscraper in the world to integrate wind turbines into its design. Each turbine has the capacity to produce 675kw of wind power. 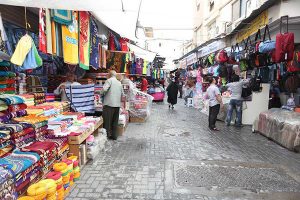 In Manama there is an older section as well with a traditional souk, or marketplace. 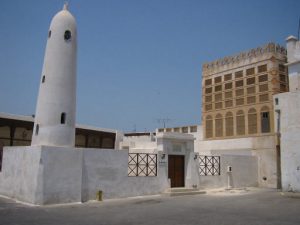 Muharraq is the oldest town, and it used to be the capital. The city has been modernized, but in the old sections one can still see traditional architecture. The houses have tall gates and shuttered windows and are designed around a central enclosed garden or courtyard. Some have wind towers, an old-fashioned form of air-conditioning. These towers are open on four sides at the top to direct passing breezes into the house.  Beit al Siyadi, shown here, was the residence of a well known pearl merchant of the region. 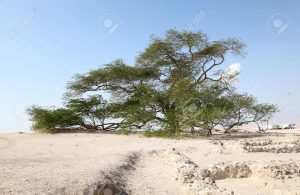 Forty kilometers from Manama in the desert of Bahrain, is The Tree of Life.  This tree is over 400 years old. It is on a hill in a barren area of the Arabian Desert. The tree is abundantly covered in green leaves and stands all alone in the middle of the sandy desert.

I had the opportunity to go to Bahrain while teaching in Kuwait.  I was a late hire, which meant when I arrived in Kuwait, I was given a tourist visa.  I had to leave Kuwait and re-enter with the proper visa.  My school in Kuwait sent myself and another new teacher to Bahrain.  We had to go to the Kuwaiti Embassy and complete the proper paperwork, then go to the hospital for blood work.  I think we had to be fingerprinted as well.  There was a lot of waiting as we fulfilled the requirements to apply for the correct work visa.  We had some time between appointments so Khalifa and I went to one of the malls and we decided to go to the cinema and watch a matinee.  What an experience!  The show we saw was from Bollywood.  The audio was in Hindu with Arabic subtitles.  I don’t remember much about the movie but I think there was even a scene from Southern Alberta taken near Calgary!  Talk about an international experience. 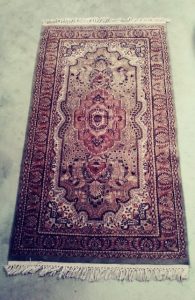 On another trip to Bahrain, I remember going to the Museum and also walking through the old section with the souk.

We also had the opportunity to visit a Persian Rug souk.  The merchant convinced me he could fold it up tightly and it would fit in my suitcase.  Here is a picture of the rug I bartered for while on a visit to Bahrain.

Time to complete this Traveling Tuesdays Episode. Be sure and come back next week and go with me to a country starting with the letter’C’.