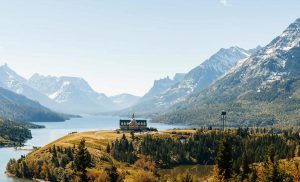 For the Letter ‘W, Traveling Tuesdays is going to visit one of Canada’s most beautiful places – Waterton Lakes National Park.  Waterton is located in the southwest corner of the province of Alberta, Canada. It shares a border with Montana’s Glacier National Park. The prairies of Alberta meet the peaks of the Rocky Mountains in this National Park known for its chain of lakes. 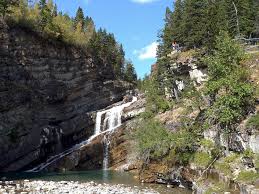 My sister, Ruth, had the opportunity to live in Waterton.  She had a job as the secretary to the Park Superintendent. As an employee of Parks Canada, she had a house located near Cameron Falls.  Cameron Falls is one of Waterton’s most famous spots and most visitors to the park have photographs of this beautiful must-see landmark! Fresh mountain water flows over steps of ancient rock into a deep basin. If you walk up the short paved path on the right hand side you will see the house where my sister lived. 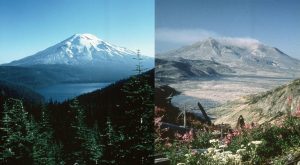 I was visiting Ruth on Victoria Day Long weekend in May 1980.  This was the weekend that Mount St. Helen’s in the USA erupted.  We woke up to find everything covered in grey ash. The fine volcanic ash from the mountain’s eruption had been blown via the jet stream and landed in Waterton.  Here is a before and after picture of Mount St. Helen’s. 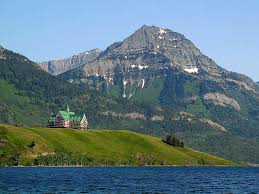 Waterton’s most recognized landmark is the Prince of Wales Hotel.  Our niece and nephew came to visit Ruth while she was living there and they call it the castle.  Visitors to the park enjoy a wander through the lobby to take in the classic view of Upper Waterton Lake.  The Prince of Wales Hotel stands on the bluff overlooking Upper Waterton Lake. 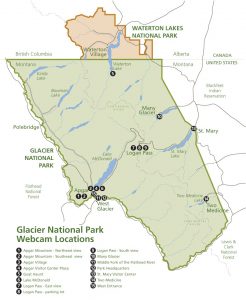 One can also take a boat tour which heads south and crosses the border into Montana. Upper Waterton Lake is part of both countries and symbolizes the Waterton-Glacier International Peace Park.  The two hour tour starts from the marina in town and in addition to exceptional sightseeing, the trip includes a commentary by excellent guides. The boat tour crossed the International Boundary to Goat Haunt Ranger Station in Glacier National Park (USA). 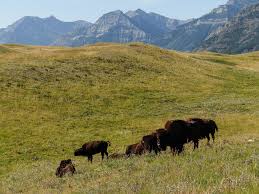 The beautiful landscape of Waterton Lakes National Park was impacted by the Kenow Wildfire in September 2017.  Before the wildfire moved into the park, the bison herd located near the entrance to the park was rounded up by some experts Grasslands National Park in Saskatchewan.  But one bull refused to go and he was left behind. The wildfire eventually burned the bison paddock, but the resilient bison managed to survive. The bull probably took refuge in one of the large ponds.

Renewal after a wildfire depends on the change to vegetation and soils caused by fire. In the Kenow Wildfire, 44% of the park’s vegetated area was burned with high or very high severity.

Waterton’s landscape has evolved with wildfire, and nature is an expert at repairing itself.  Forest that may appear destroyed or lifeless are very much alive and provide a canvas for renewal.  Read more of Waterton’s renewal in this blog post.

Waterton Park lost at least 40 individual large mammals to the wildfire. Lost were some deer, elk, moose and black bear.  In spite of this the region’s wildlife populations remain healthy.

Oh, and what about Waterton’s bison herd that had to be moved because of the fire?  They should be back – eventually. Once their native grassland habitat has renewed itself, Parks Canada plans to return them to the park. 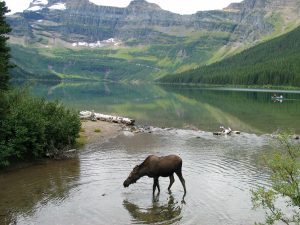 There are many opportunities to see wildlife in the park. Bighorn sheep, deer and ground squirrels are commonly seen in the townsite. Seen along mountain trails, are small mammals, birds, deer and bighorn sheep. The park’s grasslands provide places for elk, mule deer and white-tailed deer to range.  Black bears are often seen feeding in berry patches in the lower valleys in late summer and fall. Please take the time to learn some important precautions when viewing wildlife. Remember you are in bear country!

It is easy to get out and explore this park.  Step out of your car from any roadside pullout and within a short distance you can easily count twenty or thirty different types of flowers. 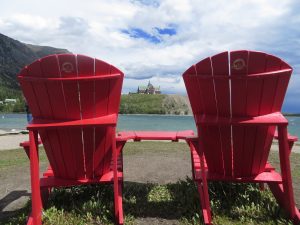 Need a place to sit and rest after a leisurely stroll or at the end of a strenuous hike?  We’ve saved you a seat. Parks Canada has five sets of red Adirondack chairs in quiet and scenic locations throughout Waterton Lakes National Park. The red chairs offer a place to slow down, relax and discover the best that Parks Canada has to offer.

Be sure and check out next week’s Traveling Tuesdays as we will be going to a place that has the letter ‘X’!