Traveling Tuesdays is starting Round Three of my Travel Stories.

So for Round Three we are going to the Canadian Province of Alberta. 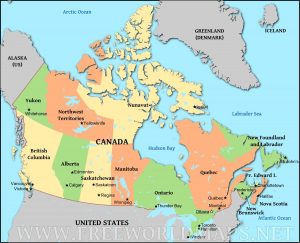 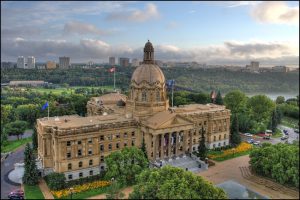 The provincial government has its seat in Edmonton the capital city of the province.

This is a view of the Alberta Legislature building. 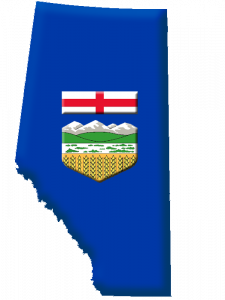 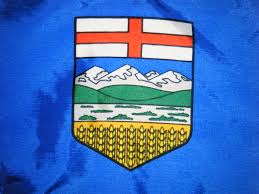 Adopted on June 1, 1968, the flag shows the provincial shield of Alberta on a blue background. The provincial shield is topped by a red St. George’s Cross on a white background.  Blue skies over a range of snow-capped mountains come next with green hills showing showing the foothills.  This is followed by prairie land and finally a wheat field in front.

I grew up on the east coast of Canada in Nova Scotia.  My first encounter with someone who lived in Alberta happened when I was a teenager.  I was fortunate to attend C.G.I.T. (Canadian Girls in Training) Camp Council in New Brunswick in Canada’s Centennial Year – 1967.  That year Camp was called Triple C.  Centennial Camp Council.  As a special event campers from across Canada were sent as exchange campers to the different C.G.I.T. Camps that summer.  At our camp there was a camper from Medicine Hat, Alberta.  I was intrigued with the name of her home town and wanted to know more about this community. 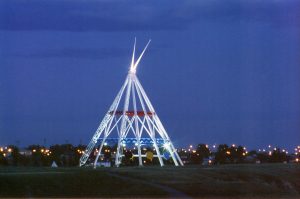 Medicine Hat is a city in southeast Alberta.  It is located along the South Saskatchewan River.  This picture shows the Saamis Teepee at night.  The Teepee was originally built for the 1988 Winter Olympics in Calgary.  It stood in Calgary’s McMahon Stadium and housed the Olympic Flame during the opening and closing ceremonies.  Designer Steve Illes had the teepee painted white for purity, red for the rising and setting sun, and blue for flowing waters.

Sometime after the Games, the late Amerigo “Rick” Nella Filanti, a prominent Medicine Hat philanthropist and entrepreneur, privately purchased the teepee from the City of Calgary.  Filanti hoped to donate the tallest teepee in the world to the City of Medicine Hat. In 1991 the Saamis Teepee was re-erected in Medicine Hat.  It is on the edge of an old Blackfoot buffalo jump overlooking the Saamis Archaeological Site (near the Trans-Canada Highway). The teepee was unveiled while traditional Blackfoot drumming and dancing was taking place. Also a telling of the “traditional Blood version” of how Medicine Hat got its name was presented by Blood storyteller Dan Weasel Moccasin. In 2003, Medicine Hat artist Jim Marshall built a brick mural depicting Weasel Moccasin’s story.  This mural now stands at the teepee’s base. The Saamis Teepee has become an icon for Medicine Hat and is one of the city’s major tourist attractions. 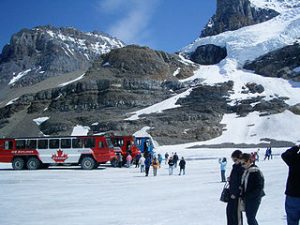 My second encounter with Alberta came five years later.  I had graduated from university and was teaching high school math and physical education in Lunenburg County, Nova Scotia.  Three of the county schools were sending 12 students on an exchange trip to Jasper, Alberta.  I was the staff member chosen to go with the 36 students as the female chaperone.  What an adventure!

We flew from Halifax, Nova Scotia to Edmonton, Alberta and then the students had a bus ride to Jasper National Park. 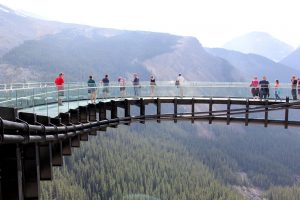 In Jasper, we had the opportunity to visit the Columbia Icefields, to go snow shoeing in the mountains and to go downhill skiing at Marmot Basin.  When we were there in 1972 you had to take a special snowmobile tour bus to see the icefields.  Today, more than 50 years later there is a skywalk that tourists take to see this amazing site.

This experience was life changing for me.  I came back to Nova Scotia determined to visit Alberta again!

My next visit came in the summer of 1975.  My sister Ruth flew out to Calgary to attend a girl friend’s wedding.  My older sister Harriet and I left Nova Scotia as soon as school finished at the end of June and we drove across Canada to join Ruth in Calgary.  We arrived in time to attend the Calgary Stampede Parade and to see one of the grandstand shows including the world famous Chuck Wagon races. 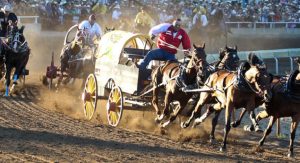 From Calgary the three Graham girls headed south to Lethbridge.  We had the car packed with a lot of Ruth’s things.  She was coming back to Lethbridge in the fall to attend college.  After visiting friends and leaving some boxes and suitcases, the three of us continued our cross Canada trip and made it all the way to mile zero of the Trans Canada Highway in Victoria on Vancouver Island.

This blog today just tells my initial connection with Alberta.  As many of you know, just two years later I resigned my position at the school in Lunenburg County, Nova Scotia and moved west to join Ruth in Lethbridge.  Lethbridge has been my home since 1977.  In Round Two I shared about Waterton Lakes National Park which is in Alberta.  I am sure I will tell you about other special places in Alberta in future episodes of Traveling Tuesdays.

Be sure and come back next week as we visit a place starting with the Letter ‘B’.