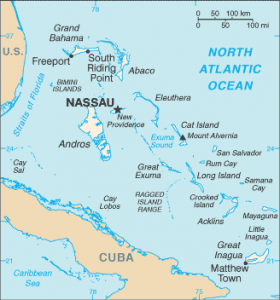 Traveling Tuesdays Round Three is going to the Bahamas for the Letter B.

The Bahamas is a coral-based archipelago in the Atlantic Ocean just off the coast of Florida.  It consists of over 700 islands and cays.  Some of the islands are uninhabited while others are packed with resorts.  In terms of gross domestic product per capital, the Bahamas is the third richest country in the Americas with an economy based on tourism and finance. 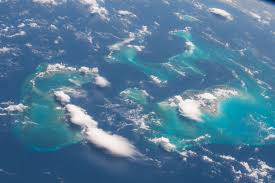 The name Bahamas comes from the Spanish term ‘baja mar’ pronounced Baha mar.  Baha mar means shallow sea in Spanish and as can be seen in this photo taken from the Space Station, the water around the Bahamas is shallow.  The sand made of white calcium carbonate and reflection of light off the bottom of the water creates a beautiful turquoise color.

The Lucayan people were the first inhabitants of The Bahamas. They were also the first inhabitants of the Americas encountered by Christopher Columbus in 1492.  It is widely believed that Columbus’ first landed in the new world on the island of San Salvador which is one of the islands of The Bahamas. The early Spanish explorers forced most native Lucayans into slavery.  In 1718 The Bahamas officially became a British colony and the British placed a ban on slavery and built settlements on the islands.  The Bahamas gained independence from Britain and became an independent Commonwealth country in 1973 with Elizabeth II as its queen. 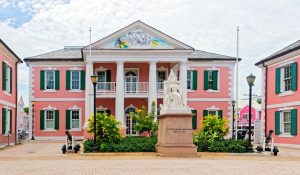 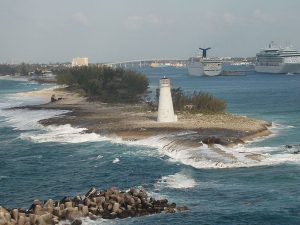 Nassau is the capital of The Bahamas. It is located on the island of New Providence.  Of the almost 400,000 people who live in the country, about 70% of them live on the island of New Providence. Nassau’s main harbor is protected by Paradise Island. In the early days, the harbor attracted settlers, particularly pirates. In 1718 the first Royal Governor, Woodes Rogers expelled the pirates, restored order and built Fort Nassau. Today Nassau is connected to neighboring Paradise Island via the Nassau Harbor bridges. The city is a popular cruise-ship stop and the city is known for its beaches as well as its offshore coral reefs which are popular for diving and snorkeling. 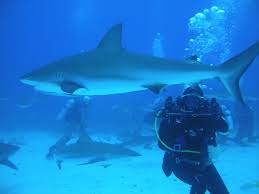 What is The Bahamas best known for? The simple one word answer is Diving.  The Bahamas have some of the world’s largest and healthiest reefs.  Exuma Cays is home to 283 sq kilometers of protected Land and Sea Park. Andros is famous for its Ocean Blue Holes.  Dean’s Blue Hole on Long Island in the Bahamas is the deepest blue hole in the world. The blue hole in the Bahamas is right next to the shore and you can go from knee deep water on the shore to a sudden drop off of 202m (663 ft). Because it’s mostly made of limestone, the islands have many caves that were created thousands of years ago when the seas were over 100 feet lower than they are today. As the sea levels rose the caves became filled with water, making them the perfect place to go cave diving. 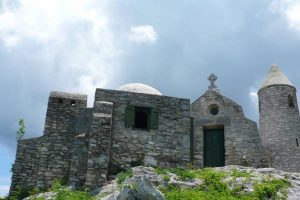 Almost all land in the Bahamas is made of sandbars or raised coral reefs. There is very little elevation in the entire country. The highest point is ‘Mount’ Alvernia on Cat Island.  Known locally as Como Hill, it is reaches 206 feet (63 meters) above sea level.  The Hermitage was built using local stone by Father Jerome (Monsignor John Hawes) on the peak of Mt. Alvernia in 1939. It is a small medieval monastery where Father Jerome could get away from the world. 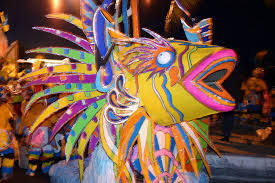 The big festival in the Bahamas is called Junkanoo.  Junkanoo is a street parade with music, dance and costumes.  It is held on December 26 and New Year’s Day every year. 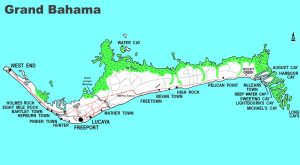 My trip to the Bahamas was a short visit to the island called the Grand Bahama.  Grand Bahama is the northernmost island of the Bahamas archipelago.  My friend, Carol, and I joined a cruise ship in Florida and the over night cruise stopped in Freeport.  Included in our vacation package was a self contained suite at a timeshare exchange on the island.  We enjoyed swimming in the pool and exploring the markets on the island.
My visit was too short.  Definitely a return visit to the Bahamas is on my bucket list.  Be sure and return next week as Traveling Tuesdays will be going to a place starting with the Letter C.