Traveling Tuesdays is heading to the Central American country of Costa Rica. 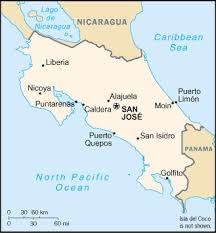 This country has coastlines on the Caribbean Sea and the Pacific Ocean.  Costa Rica is known for its beaches, volcanoes, and rainforests. About a quarter of its area is made up of protected jungle which is teeming with wildlife including spider monkeys and quetzal birds. 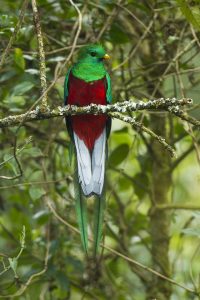 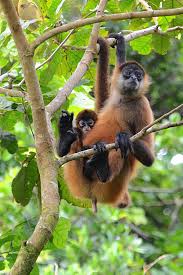 San Jose is the capital of Costa Rica. 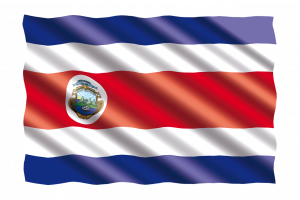 The flag of Costa Rica has five horizontal bands of blue, white, red, white and blue.  The middle red band is of double width and contains the National Coat of Arms.  The white color stands for peace, wisdom and happiness.  The red for the blood shed by martyrs in the defense of the country, as well as the warmth and generosity of the people.  The blue bands are the two seas along its coastlines. 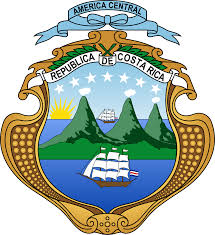 Costa Rica’s Coat of Arms is also called the National Shield.  It depicts its geography, the oceans, prosperity, the provinces and coffee.  The three volcanoes stand for the three mountain ranges of the Country with a valley in the midst.  The two merchant sailing ships are centered in the foreground and the background seas representing the Pacific and the Caribbean.  The rising sun shows the country’s search for prosperity and the seven stars in the sky represent the seven Provinces.  The small golden circles on either side stand for the ‘Golden Beans’ or coffee the cash crop of Costa Rica.

The sun in the Coat of Arms is said to be the rising sun but on the other hand the sun is located just above the horizon on the left side which is the West Side of the Coat of Arms so possibly it would be setting and not rising.  A setting sun might allude to the fact that Costa Rica decided to ban any armed forces and so retired its military and arms a long time ago.  To this day Costa Rica is one of the 23 countries in the world without an army.  Instead of funding an army, Costa Rica invested in education.  This tiny country now boasts a 96% literacy rate, the highest in Latin America.

Costa Ricans call themselves Ticos (males) and Ticas (females).  Foreigners are often called Gringos and Gringas. The culture is a blend of indigenous heritage and Spanish colonial influence.  Mixed with some Jamaican, Chinese and other immigrant cultures, the result is a nation of friendly, laid-back, and happy people.
I had the opportunity to visit Costa Rica for a week.  I booked a timeshare exchange in San Jose and took advantage of the various tours organized by the tour coordinator at the time share office.  I went on a walk in the rainforest and saw many animals that were unique to this part of the world.  I did a trip to the Pacific Coast and saw some beautiful homes built on stilts, took a boat ride and saw lots of alligators and well as a variety of birds.  Another trip took me into the mountains and we enjoyed a place with many different swimming pools.  Other more adventurous tours included a zip-line ride. 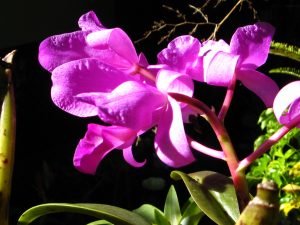 This exquisite orchid known for its purple hues and diamond-like shimmer is the guarianthe skinneri. This plant, which blooms from January through April, is Costa Rica’s national flower. 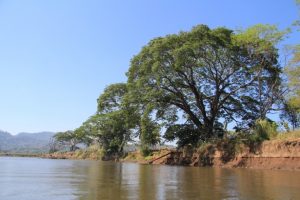 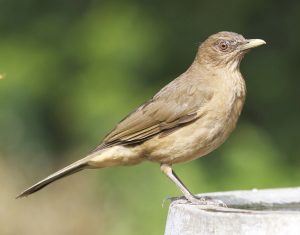 The clay-colored thrush is the national bird.

More than one quarter of Costa Rica’s land is dedicated to national parks, reserves and wildlife refuges. There are more than 100 different protected areas to visit.

I trust I have given you a taste of Costa Rica and that you are considering adding this beautiful country to your bucket list.

Come back next week as Traveling Tuesdays heads to a place starting with the letter D.