Traveling Tuesdays is going to visit South Africa’s biggest city, Johannesburg.  I had the opportunity to fly into Johannesburg’s International Airport for the first time in 2001. The short code for the airport is JNB.  There are a total of 6 terminals today including International, Domestic and Transit terminals.  It is the biggest and busiest airport on the continent of Africa. It is estimated that 28 million passengers pass through its terminals every year. 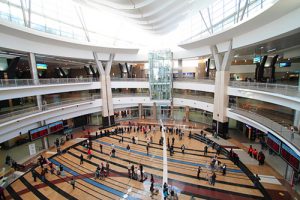 Founded in 1952, the Johannesburg Airport is located 34 km from the city centre.  In 1994 the Johannesburg Airport was renamed as Johannesburg  International Airport and in November 2006 it was renamed the OR Tambo International Airport after Oliver Tambo, the former president of the ANC.  The African National Congress is the Republic of South Africa’s ruling political party. It has been the governing party of post-apartheid South Africa since the election of Nelson Mandela in the 1994 election. The ANC has won every election since 1994. 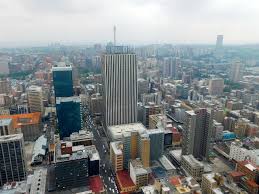 Johannesburg is famous for a catchy genre of African house music that was born in the 1990’s called Kwaito music. Kwaito is a form of self-expression and a way of life. It is the way many South Africans dress, speak, and dance. The music reflects life in the townships. Johannesburg is also known as the City of Gold because of its beginnings as a gold-mining town. But it is known fondly to locals by the shortened ‘Joburg’, or now more popularly as ‘Jozi’. 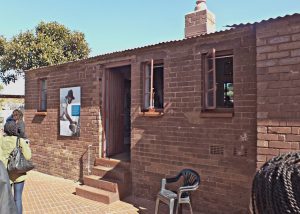 Soweto is a township of the City of Johannesburg Metropolitan Municipality. Soweto borders the city’s mining belt in the south. Its name is an English syllabic abbreviation for South Western Townships. Soweto was once home to Nelson Mandela and Desmond Tutu. Mandela’s former residence is now the Mandela House museum. Other Soweto museums that recount the struggle to end segregation include the  Apartheid Museum and Constitution Hill, a former prison complex. 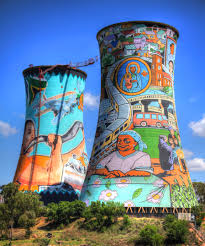 The Soweto Towers have become one of the most recognizable landmarks in the world. They were built in 1951 as part of the Orland Power Station serving Johannesburg. The power plant was decommissioned in 1998 and now the towers are used for art and advertising. One tower serves as a giant billboard and the other tower contains the largest mural painting in South Africa. If you like, you can bungee jump from a platform bridge between the two towers. 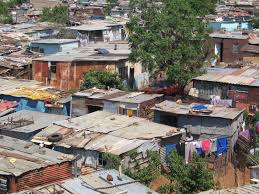 Johannesburg is the world’s biggest man-made forest. There are over 10 million trees and this number is set to grow. City Parks launched the Greening Soweto project in 2006, with the goal of planting an extra 200 000 trees in the famous township.  Joburg’s trees not only combat the greenhouse effect, they help reduce the noise in this ‘urban jungle’.

While in South Africa I took a city tour of Johannesburg which included a stop in Soweto. 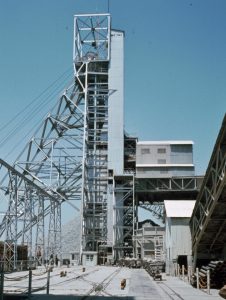 I also had the opportunity to go to Cullinan to see the diamond mine known as Premier mine. The site is located about 40km east of Pretoria. The open-pit mining at Cullinan diamond mine began in 1903. It is one of the major sources of blue diamonds in the world.  When I went to the mine it was owned by De Beers. Petra Diamonds was able to purchase a 37% stake in the mine from De Beers in 2008. Petra increased this to 74% in 2009 by purchasing Al Rajhi’s shares. The mine has a life of more than 50 years. The current mining plan is for 16 years. 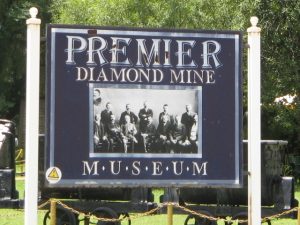 Cullinan diamond mine is located on a diamond-bearing kimberlite pipe shaped like a carrot. It is considered to be the largest kimberlite pipe of the region.  The volcanic pipe has a surface area of 42 hectares –  about 40 soccer fields. The Cullinan pipe has three types of kimberlite. They are brown, grey and black (hyperbyssal). 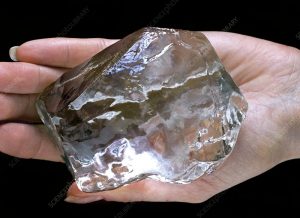 Cullinan is known as a source of large, high-quality gem diamonds. It earned its place in history with the discovery of the Cullinan diamond in 1905. This was largest rough gem diamond ever found at 3,106 carats. The diamond was cut to form the two most important diamonds in the British Crown Jewels.  The Cullinan Diamond 3106ct was given to King Edward the VII of England on his 66th birthday. The diamond was mailed to England under normal package post.  This picture shows a glass replica of the Cullinan Diamond 3106ct.

A diamond is the hardest natural substance known to man.  It is a 10 on the Mohs scale where talcum powder being the softest is a 1 on the Mohs scale and is softer than human skin.  The word diamond comes from the Greek word “adamas” and means invincible. A 1.00ct diamond weighs 0.2g. The weight of the famous Cullinan Diamond 3106ct was 621.2g.

One on my memories of my tour of the mine was the security imposed upon all of us.  When we left, we had to go through tighter security than that at most airports.  They wanted to make sure we didn’t take any diamonds home with us!

Today’s Traveling Tuesdays trip to Johannesburg is just a taste of what you can see in this part of the world.  I trust you enjoyed me sharing my experiences while stopping here at Johannesburg International Airport.

Be sure and check out next week’s Traveling Tuesdays as we will be going to a place starting with the letter ‘K’.