Traveling Tuesdays is going to the Scandinavian country of Norway, officially the Kingdom of Norway.

The total area of the country is 385,207 square kilometers and it has a population of 5.312,300 (as of August 2018).  Norway shares a long eastern border with Sweden, and is bordered by Finland and Russian to the north-east. and the Ksagerrak Strait to the south, with Denmark on the other side.  Norway’s extensive coastline faces the North Atlantic Ocean and the Barents Sea.

When I think of Norway the words viking and fjords come to mind.  I think in school that was mostly what we learned about this beautiful country. Norway is also known for fishing, hiking and skiing. 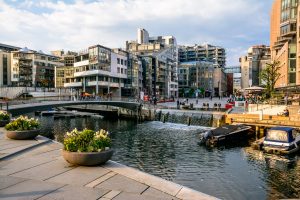 I had the opportunity to visit Norway and I remember being in the capital city, Oslo.

My sister Ruth and I took a city tour and we saw the waterfront, The Viking Ship Museum, and the Vigeland Park. 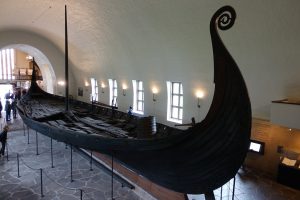 The Viking Ship Museum is located on the Bygdøy peninsula in Oslo. It is part of the Museum of Cultural History of the University of Oslo, and houses three Viking era burial ships. These ships date back to the 9th-century. 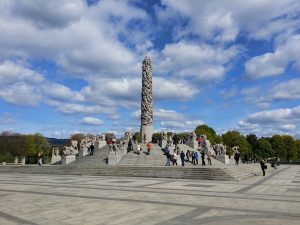 Oslo’s Vigeland Park is the largest sculpture park in the world by a single artist.  There are over 200 pieces by the Norwegian sculptor Gustav Vigeland. The collection is set along a boulevard in Oslo’s Frogner Park. The sculptures are made from bronze and granite. The Monolith is the centerpiece.  It is situated on a plateau raised high above the surrounding park. The Monolith is carved out of one enormous piece of granite and has 121 figures climbing in and around each other as they fight their way to the top.

The National flag of Norway has the tricolor of blue, red, and white which denotes the country’s liberty and independence. The blue cross is the Cross of Sweden and the white cross is the Scandinavian Cross. 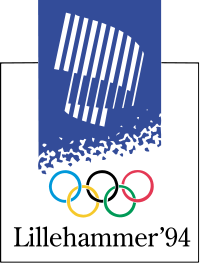 I remember watching the Lillehammer Olympics while teaching school in Canada.  One of my favorite activities that I did with my Grade 5 class was to combine Social Studies with the Olympics.  Each student would pick a country participating in the Olympics that year and learn about their country. They would find out which sports their country was participating in and we would watch the opening ceremonies and following along with the results during the Olympic Games.  Activities in our Physical Education classes would be adaptations of the the games in the Olympics and the students would represent teams in the Olympics.

I trust this brief visit to Norway has encouraged you to take a trip to Norway and see this country for yourself.

Be sure and return next week as Traveling Tuesdays will be going to a place starting with the letter ‘O’.