For the Letter ‘O’ this round, Traveling Tuesdays is going to a town in Germany called Oberammergau. 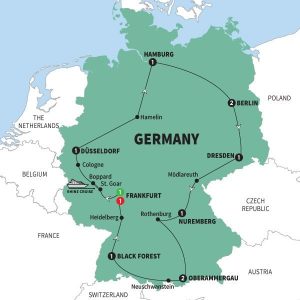 Oberammergau is a town in the Bavarian Alps. It is close to the border with Switzerland.

Usually in my Traveling Tuesdays post I tell you about places that I have already visited.  This week is different.  I have not been to Oberammergau but I plan a trip to this town next year.

Just over a year ago my sister, Harriet, called and asked if I would go with her to see the Passion Play in Oberammergau in 2020.  She told me that she always wanted to go and the play is held once every 10 years.  If she doesn’t go in 2020 she would never get there because in ten years time we would both be in our 80’s.  So we did some research and paid our deposit on a trip to see the Heart of Europe.  The highlight of this tour is the Passion Play.

Oberammergau is a municipality in Bavaria, Germany.  This small town is on the Ammer River. It is known for its once-a-decade performance of the Passion Play in the Passion Play Theater.   In 1633 Oberammergau was stricken with the plague. After several months of suffering the townspeople made a plea to God to spare them.  They pledged to act out the suffering, death and resurrection of Jesus Christ every ten years. Over 2000 villagers from Oberammergau reenact the passion of Christ from His entry into Jerusalem to the Resurrection.  2020 marks the 42nd performance of the Oberammergau Passion Play. 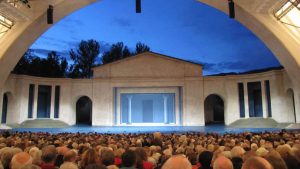 We will arrive in Oberammergau the night before and following lunch on May 31, 2020 we will walk from the hotel to the theatre.  The theatre was built in 1930 and has seating for 4,800 spectators.  The seats are covered but the stage is open to the elements.  The natural grandeur of the region is used as a backdrop. 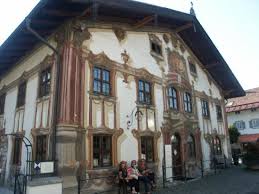 Oberammergau is also known for its woodcarvers and woodcarvings.  The House of Pilate has frescoes by Franz Seraph Zwinck and live demonstrations by the woodcarvers and artists. 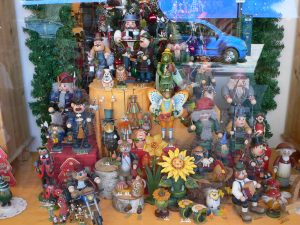 We will have time to go shopping and this store front shows many wooden toys.  I think I know what I will be buying for my two grand nephews.

Oberammergau is also renowned for its NATO School. 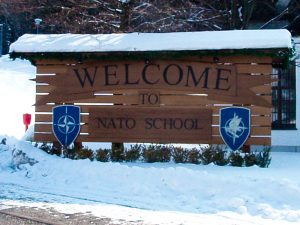 Shortly after WW II, the US Americans moved into the 1935 barracks and founded the School.  The first courses were designed for NATO commanders and staff officers.
Today over 20 nations, including non-NATO countries such as Austria and Switzerland, provide personnel for school operations.  The funding of the school is mainly through course and conference fees, which are collected by the participants.
The course participants come from all member states of NATO as well as from nations that belong to the countries of the Mediterranean Dialogue or the “Partnership for Peace”. In addition, officers come from countries such as Argentina, Australia or South Africa. The school is considered one of the leading academies in the field of international security.  The focus on “networking”, dialogue between participants, strengthens the cooperation and mutual trust of the member states of NATO. 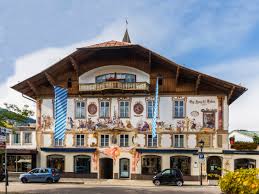 My sister and I are looking forward to the opportunity to visit this small community and experience the Passion Play.  When my sister came to visit me in Alberta from Nova Scotia about five years ago we traveled to Drumheller, Alberta and went to the Passion Play held each summer in the Badlands of Alberta.  Seeing the play in Oberammergau will be dream come true for my sister.
Be sure and come back next week as Traveling Tuesdays will be going to a place starting with the letter ‘P’.