Traveling Tuesdays is visiting one of the oldest countries in Europe.  We are going to Portugal. 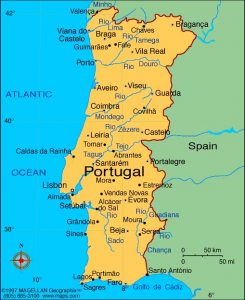 Portugal is on the Iberian Peninsula in southwestern Europe.  It is bordered by the Atlantic Ocean on the west and south and by Spain on the north and east.  The Atlantic archipelagos of the Azores and Madeira are also part of the territory owned by Portugal. 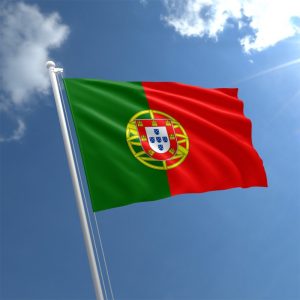 The flag of Portugal is red and green.  The coat of arms is located where the two colors meet.  The green stands for hope for the future and the red symbolizes the blood of the nation.

The five small blue shields stand for the five Moorish kings who were defeated by the first King of Portugal. 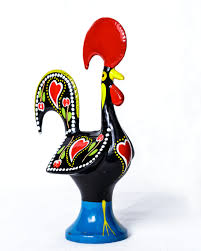 Another symbol of Portugal is the brightly colored rooster called the Galo de Barcelos.  The Galo de Barcelos symbolizes honesty, integrity, trust and honor.  It is said everyone should have one in their house to bring them luck. 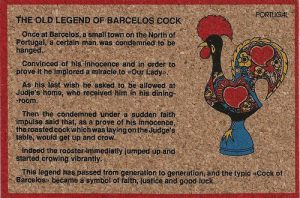 Here is the Old Legend of the Barcelos Cock as written on the plaque.

Once at Barcelos, a small town on the North of Portugal, a certain man was condemned to be hanged.  Convinced of his innocence and in order to prove it he implored a miracle to ‘Our Lady’. As his last wish he asked to be allowed at the Judge’s home, who received him in his dining-room.  Then the condemned under a sudden faith impulse said that, as a prove of his innocence, the roasted cock which was laying on the Judge’s table, would get up and crow. Indeed the rooster immediately jumped up and started crowing vibrantly.

This legend has passed from generation to generation, and the ‘Cock of Barcelos’ became a symbol of faith, justice and good luck.

I had the opportunity to go to Portugal on two occasions.  The first time was in 1992.  My sister, Ruth, and I went to the Algarve area of Portugal.  We were guests of a friend Ruth met in Dublin, Ireland.  Guess what!  Her name was Lucie.  When both Lucy’s were in the room it was easy to tell who Ruth was speaking to.  My name is pronounced ‘LU cy’ and Lucie’s name was ‘Lu CEE’!  🙂 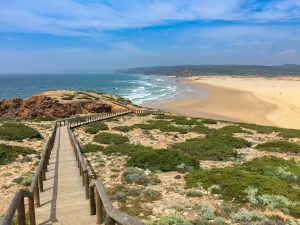 The Algarve is Portugal’s southernmost region. It is known for its Atlantic beaches and golf resorts. The whitewashed fishing villages on low cliffs overlooking sandy coves were transformed in the 1960’s. Now the central coast between Lagos and Faro is lined with villas, hotels, bars and restaurants.

Albufeira is a popular tourist destination.  We were fortunate to stay off the beaten path at Lucie’s timeshare.  We drove along the coast to Faro and enjoyed the ocean views and exploring this area of Portugal.  We even crossed the border and took a day trip to Seville in Spain.

My second visit to Portugal was my most recent overseas adventure.  In May of 2019 I went to Spain to participate in an International Handbell Festival.  We gave four concerts in four different cities in Spain.  Following the Hand Bell Tour about 15-20 of the ringers remained in Europe and we traveled by bus to Portugal.  The first stop was in the city of Porto. 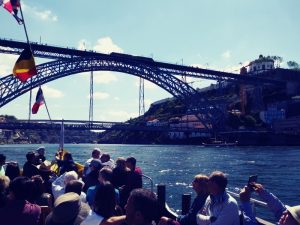 The coastal city of Porto is known for its stately bridges.  We enjoyed a cruise on the river Douro. In the medieval riverside district we saw the narrow cobble-stoned streets as they passed merchants’ homes and cafes. 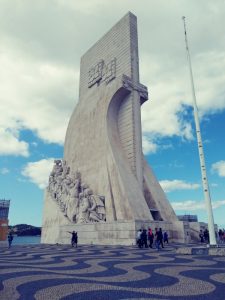 The other major city we visited was Lisbon, the capital of Portugal.  I took this picture of the Monument to the Discoveries built in 1939 to honor the Portuguese Discoveries of the 15th and 15th centuries. The Monument to the Discoveries was originally built for the 1940 World Exhibition. It is made up of a group of sculptures that represent the prow of a small sailing ship constructed and used by the Portuguese to explore the Atlantic Ocean.  The design on the ground makes you feel like you are walking on waves!

This is just a snap shot of my two trips to Portugal.  So much to share and not enough space in just one blog.  I trust I have piqued your interest and you will add it to your bucket list.

Be sure and return next week as Traveling Tuesdays will be visiting a place with the letter Q.