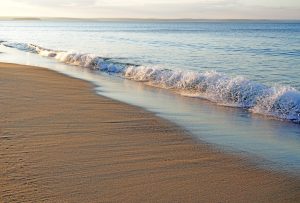 Queensland, NS is known for Queensland Beach. Located about 40 km from Halifax, Queensland Provincial Park is situated in the South Shore region.  Not very large, but this beach is supervised in (July and August) and is one of the most popular on the South Shore. The warm air and sand draw large crowds, so you need to arrive early on the hot days to find a parking spot. 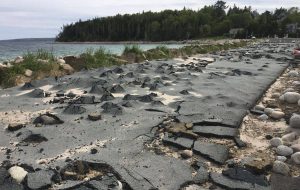 In January of 2018 there was a winter storm which destroyed Conrads Road, the only road between the beach and Queensland Lake. Repairs were finally made in June and the Conrads Road was realigned and located closer to Queensland Lake.  Instead of pavement, the road was repaired and made of gravel.  The beach was reopened in time for Canada Day, July 1, 2018. 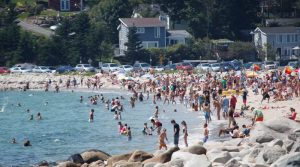 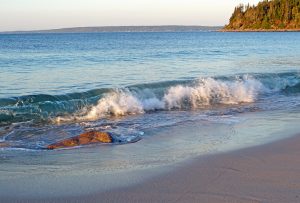 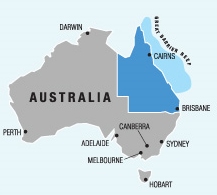 Queensland, Australia is a state covering the continent’s northeast.  It has a coastline stretching nearly 7,000 km.  Offshore is the Great Barrier Reef.  The city of Cairns is the gateway to the reef and the tropical Daintree Rainforest.  The capital is Brisbane which is flanked by the surfing beaches of the Gold and Sunshine Coasts.
While I grew up in Dartmouth, Nova Scotia not far from Queensland Beach, I never visited the Queensland Beach Provincial Park.  But I have had the opportunity to go to Queensland, Australia.
In 2006 I flew into Brisbane and on to Cairns.  I 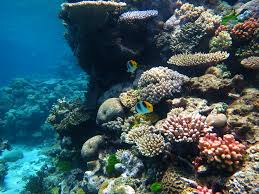 n Cairns I went for a boat ride to see the Great Barrier Reef.  It was quite a thrill to float on the surface with a snorkel and mask and watch the colorful fish and see the amazing coral which was home to so many different species. 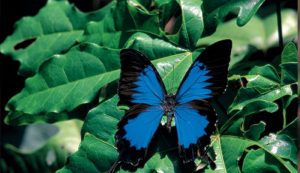 While in Cairns I also explored the Daintree Rainforest and had the opportunity to go to the Butterfly Farm. 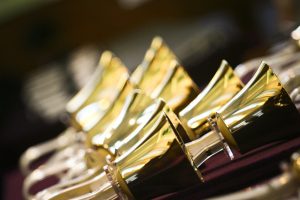 After my visit to Cairns I returned to Brisbane and joined handbell ringers from around the world as we participated in the 12th  International Handbell Symposium held at the convention center in Brisbane. 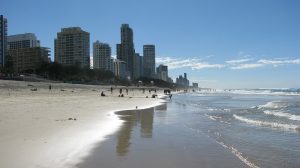 The beaches near Brisbane are much larger than Queensland Beach in Nova Scotia.  Beautiful sandy beaches and gentle ocean waves attract visitors no matter where in the world the beach may be.
When I started my search for a place starting with the letter ‘Q’, I did not imagine I would be sharing about my trip to Australia.  I trust you were delighted as I was, to rediscover this wonderful trip I enjoyed in August of 2006.
Be sure and return next week as Traveling Tuesdays will be going to a place starting with the Letter ‘R’.