Traveling Tuesdays is heading to a famous town in England.  We are going to Windsor in Berkshire.  The town of Windsor is located just west of London on the south side of the Thames River. 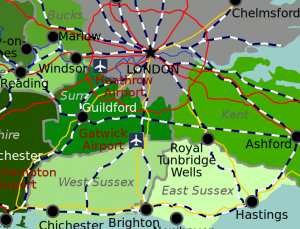 Windsor is very close to Heathrow and makes a great destination if one is looking for accommodations with easy access to London and surrounding areas.  I have stayed in Windsor at a couple of B&B’s while making a stop over between flights to and from many trips to Europe or back home to Canada.

Traveling to Windsor is relatively easy if one has a car or rents one while traveling around Britain.  Windsor is only 22 miles from London.  Google maps says it takes 18 minutes to go from Heathrow to Windsor Castle using A4 and B470. 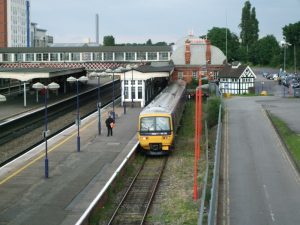 If you are staying in London, the Great Western Railway operates services between London Paddington and Windsor. One needs to change trains at Slough to catch the branch line service to Windsor.  The journey by train from London is about 55 minutes. 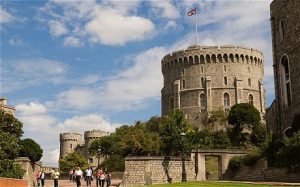 Windsor is famous for its connections with the royal family. It is home to Windsor Castle which is a residence of the British Royal Family. 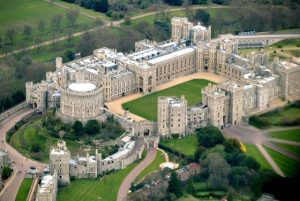 The first castle was built by William The Conqueror in 1078.  Windsor Castle has served as the summer residence of the Royal Family for more 900 years.  This beautiful residence is also the largest inhabited castle in the world and has been added to numerous times by many monarchs. Public tours allow one to see the State Apartments containing the Queen’s Gallery and dining hall. Each of these have magnificently painted ceilings and woodcarvings and contain extravagant furnishings, and paintings from the royal art collection. 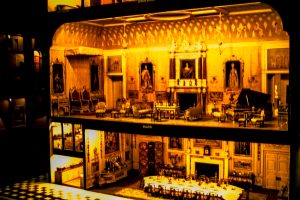 One of my favorite things to see was Queen Mary’s Dolls’ House. This is the largest, most famous and most beautiful dolls’ house in the world. It is located inside Windsor Castle and is included with standard admission to the Castle. It was built in the early 1920s and completed in 1924 for Queen Mary, the wife of King George V. 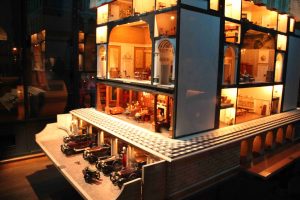 The dollhouse was made to scale. (1:12 – one inch to one foot.) It is over three feet tall and contains models of products of well-known companies of the time.  The carpets, curtains and furnishings are all copies of the real thing. In the library there are miniature books containing original stories written by authors including A.A.Milne and Sir Arthur Canan Doyle. The house has working lights, the bathroom has running water and a toilet that flushes! There is a car garage complete with cars that have engines that work! 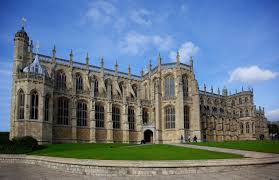 St. George’s Chapel is a chapel built in high-medieval Gothic style.  It is both a church under the direct jurisdiction of the monarch and the Chapel of the Order of the Garter. 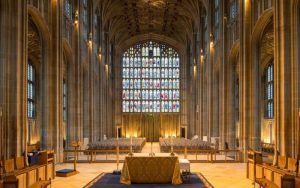 Originally founded in the 14th century by King Edward III, it was enlarged in the late 15th century.  It has been the place of many royal weddings.

Prince Harry, Duke of Sussex  and Meghan Markle were married here on May 19, 2018.

Other things to explore at Windsor Castle are its spectacular grounds. The site itself covers some 13 acres.

Windsor Great Park extends along the south side of the castle for nearly six miles. A carriage ride is a perfect way to take it all in, without wearing your legs out! You can pack a picnic and arrange for your driver to stop for half an hour by the lake, while you eat lunch and feed the ducks, before finishing your ride.

The Crooked House of Windsor is the oldest tea house in all of England. 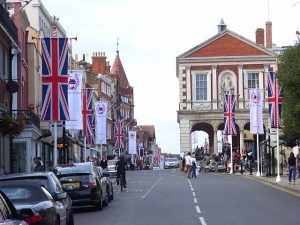 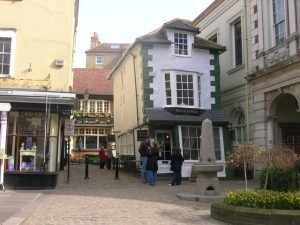 Exploring the town of Windsor is lots of fun.

You can find old buildings and cobblestone lanes.  The town has maintained its picturesque medieval appearance.

The town is definitely a popular tourist destination.

Be sure and return next week as Traveling Tuesdays will be heading to a place containing the Letter ‘X’.